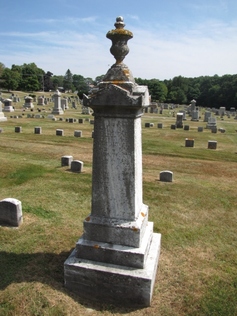 Samuel was a carpenter, building ships while he lived in Eliot, and after moving to Cambridge, MA around 1880, he had his own business as a house carpenter. He was a member of the John A Logan, Post 186, GAR, in Cambridge, and held the officer's position of surgeon for many years. He also took part in decorating the graves of veterans at North Cambridge Cemetery [Cambridge Tribune, 5/27/1899].

III. SAMUEL OSCAR TOBEY, b. 29 Sept 1870 in Eliot; d. 6 Mar 1898 in Plymouth, FL. He had moved there in Jan '98 due to a stomach ailment, with hopes the better climate would renew his health. His body was sent back to Cambridge for a funeral, and he was buried in the family plot at Mt Pleasant Cemetery in Eliot [Cambridge Chronicle, 3/12/1898]. He had been a horse dealer while in Cambridge, residing with his father [1898 City Dir]. He didn't marry.