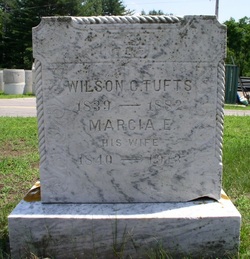 WILSON C TUFTS was born in 1839 [gravestone] in Farmington, NH [Descriptive Roll], the son of David and Charlotte (Garland or Smith) Tufts. He died in 1882 [g.s.] and was buried in Rochester Cemetery, Rochester, NH.

He married, in Somersworth, NH on 13 July 1861, to MARCIA E KELLY (also seen as Marsha). She was born 9 Apr 1840 in Limerick, Maine [NH Death Rec], and died on 17 March 1913 in Rochester at age 72 yrs, 11 mos, 8 das, from heart disease [NH Death Rec]. She was likely the daughter of Isaac and Mary (Gilpatrick) Kelly. This couple had a female named Marsha in the 1850 Limerick, ME census, age 11, and the William C. in same house is probably the brother C.W. mentioned in her obit. Her parents were not listed on death record. Her obit was carried in the 18 Mar 1913 issue of the Fosters Daily Democrat:
Mrs Marcia Tufts, widow of Wilson C, dropped dead last evening at about 11 o'clock at her home on Knight St. The cause of her death was heart trouble. The dec'd was born in Limerick, Maine, but had been a respected resident of Rochester for 40 years. She is survived by a brother C W Kelly of North Berwick, and one son, L C Tufts of Danvers, MA

Wilson was, at age 10, living in the 1850 Farmington, Strafford, NH census household of David and Charlotte Tufts. This couple is the David K Tufts and Charlotte Smith who married in Dover on 4 Feb, 1825 [VR of Dover p182], and seen in the 1830+40 censuses for Farmington. The Amos Tufts who lived with Wilson in 1880 Rochester, NH census died in 1900, and record lists his parents as David and Charlotte (Garland) Tufts. Wilson moved to Berwick, ME by 1860, seen there working as a carpenter, and living in house of Alvin Spencer. He was also enumerated in Rochester,NH, as a carpenter apprentice, living with James and Mercy Blaisdell. By 1862, he had removed to North Berwick, where two of his children were born. He afterwards moved to Rochester, NH, remaining employed in the carpentry business.