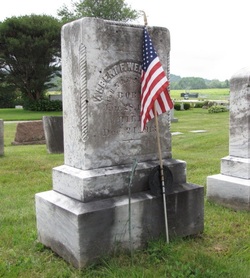 Albert lived his life in South Berwick, occupied as a stone cutter and a farm laborer [census recs]. His brother Bradford served alongside him in the 27th Maine.

This couple had two known children:

II. PERRY A WENTWORTH, born 18 Jan 1883 in Salem, Rockingham, NH [NH Birth Rec]. His whereabouts after this are unknown at this time.