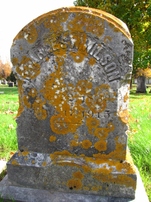 CHARLES W WILSON was born in Westbrook, Maine [descriptive roll; death rec;obit], the son of Christopher Wilson. He died in Saco, Maine on 16 June 1915, aged 81 yrs, from old age and disease of heart [ME death rec]. He was buried in Laurel Hill Cemetery, Saco.

Charles lived in Westbrook his first 11 years, then moved to Pownal, where he worked on a farm until he was 20 years old. He left there for Saco where, in July of 1853, he began working for the York Mills, a cotton mill. He would work there the next 57 years, 34 of those as second hand in the carder room. During the Civil War, due to a lack of cotton from the south, the mill had shut down, and its workers were free to enlist for the cause. It seems he also went for a time (ca 1865) to Michigan, for reasons not yet known, as many records show his son Frank as being born there.

He was a member of the Fred Gurney GAR Post in Saco.