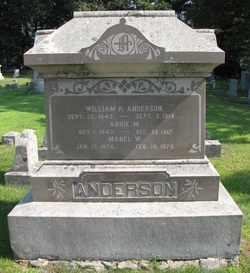 William was called a blacksmith and a farmer in census records. His brother Amos also served in the 27th ME. The US Naturalization papers show that William R and Amos immigrated in 1853, arriving in Boston, MA. They were both naturalized on 16 Mar 1866 [US District Court, Portland, ME]. William was living in Dorchester, MA by 1917 [Boston St Dir].

William and Annie had two children according to 1900 census data: