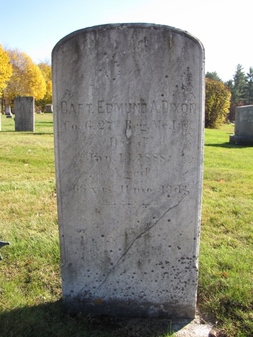 ​Edmund lived early on in his native Eliot, where he ran a butcher shop, and moved to Kittery by 1849. During the 1850's, he had contracts with the Portsmouth Shipyard for the delivery of fresh beef and vegetables. When the war broke out, Edmund was serving as a lieutenant in the Kittery Artillery, a company of Maine militia led by Mark Wentworth (later colonel of the 27th ME), and were assigned to Fort McClary. He returned to Eliot by 1862, and was chosen by the town to raise the troops needed for nine months men. He was subsequently elected captain for the company of those men who volunteered from Kittery and Eliot.
Following the war, he removed to Brighton, Mass, where he continued his butcher business. He afterwards went on to Taunton, MA, but returned to Eliot between 1878-1880, and lived with his brother Oliver on the family homestead. This was only for a brief time, as he gave up the butcher work and moved to Cambridge, MA in 1881, and stayed with his daughter Ellen and her husband Amos Wells. By 1886, he had left there and returned to Eliot, where he died.

Edmund and Ann had four daughters:

ii. ELLEN JOSEPHINE DIXON, b. in Eliot; d. 25 Jan 1893 in Cambridge, MA from Bright's Disease [death rec]. She married, on 27 Jul 1867 in West Roxbury [MA marr rec], to AMOS BURNHAM WELLS. The son of Amos B and Elizabeth (Buckman) Wells, he was born in Charlestown (or Malden) on 1 Sept 1846, and died in Cambridge on 20 Feb 1911 [death rec]. He worked as a teamster, and lived in Cambridge. He is buried in Cambridge Cemetery. He would remarry, and adopt a girl, but he and Ellen had no children.