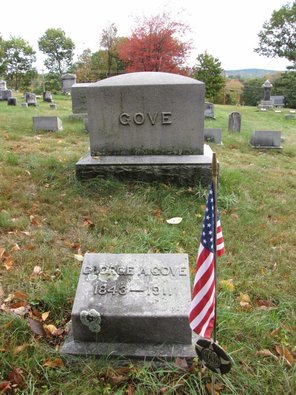 ​His mother having died in 1855, his father remarried in 1858 to the widow Mary Ann (Cole) Dearborn of Limerick, where the family had recently located to. George and his step-brother, Richard Dearborn, both signed up to serve in the 27th Maine. George reenlisted on 4 Feb 1864, to serve with the 1st D.C. Cavalry, and was mustered into Company H on 6 Feb. He was wounded and taken prisoner at Staunton River, during Wilson's Raid, on 26 June '64. At one point, while a prisoner, he was reported killed. He was later exchanged and rejoined his regiment (which had now been transferred to the 1st Maine Cavalry) in the winter of 1864-65. He was wounded again, this time at Dinwiddie Court House on 31 March 1865, where he "got a bullet through the lung, the wound troubling him to the close of his life" [Obit]. He would be discharged on 18 May 1865, due to disease associated with his wounds.