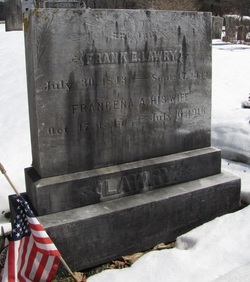 He married on 28 Oct 1865 in Kittery, ME to FRANCENA A WALDRON, the daughter of John W and Priscilla (Patch) Waldron. She was born 17 Oct 1845 and died on 6 July 1916 [ME VR]. Her brother Manning Waldron served in company G alongside Franklin, until he died of disease in Dec of 1862.

A native of Kittery, he had resided there during his entire life with the exception of the time he was serving with the 27th and 32nd Maine regiments during the Civil War. Frank, along with many others of the 27th, reenlisted into the 32nd ME Infantry when it was organized. He was mustered into company A on 3 Mar 1864 and was mustered out when regiment consolidated with the 31st ME on 12 Dec 1864. He was a corporal and sergeant. He worked in the blacksmith shop on the Navy Yard for 35 years [obit]. He was one of the last (perhaps the only) remaining members of the 27th Maine alive in 1932.

Frank and Francena had the following children: