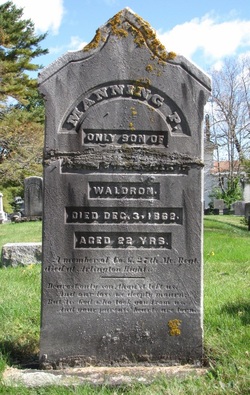 MANNING P WALDRON was born circa 1840 in Kittery, Maine, the only son of John W and Priscilla T (Patch) Waldron. He died of disease on 3 Dec 1862 at age 22 years while the 27th Maine was stationed at Arlington Heights, VA. He was buried in the First Baptist Church Cemetery in Kittery, ME [YCCI, pg 998].

Manning was unmarried. His sister, Francena, married Franklin E Lawry, who served alongside him in same company from Kittery. The regimental enlistment roll for Kittery shows Manning's age as 21. This was erroneously recorded as 24 onto the muster rolls.

A letter written on 14 Dec 1862 by Josiah Williams of Co G to Joseph O W Dearing of Kittery Point [mentioned in the 9/18/1923 issue of the Portsmouth Herald, pg 5] tells of Waldron's death by sickness, how men of the company took him to Washington, DC for embalming, and he was sent home by express. Hiram Grace (not the same man in Co G) picked up his body at Portsmouth during a snowstorm and brought him home to Kittery Point.