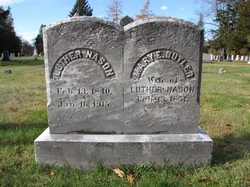 Luther was a house carpenter, and he lived in South Berwick, Berwick, and in Somersworth, NH. His brother Elwell Nason served alongside him in the 27th ME.

Luther had four daughters, two born of each wife, all are buried at Pleasant Hill Cem, S.Berw: