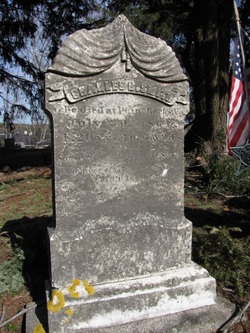 CENOTAPH at Greenwood Cemetery
CHARLES B SMITH was born around 1844 in Hollis, Maine [Descriptive Roll], the son of Hiram B and Betsey (Ford) Smith. According to a cenotaph in Greenwood Cemetery, Biddeford, he died on 30 July 1864 at age 20 yrs,7 mos,9 das from "while in his second term of his country's service" [YCCI, pg 261]. Originally buried at the Point of Rocks cemetery, he was later moved to City Point Cemetery.

With his brother Atwood, Charles signed up into the 27th Maine Infantry on 10 Sept 1862 and was mustered in on the 30th. Following the nine-month term of service, he reenlisted into the 1st District of Columbia Cavalry the following year, on 11 Feb 1864 in Portland. He was mustered in on 19 Feb and returned home on a brief furlough to marry the following day. While participating in Wilson's Raid with his regiment, he came down ill following a sixty mile walk back to camp (his horse being played out). Admitted to the regimental hospital with exhaustion, fever and diarrhea, he was then sent to the Point of Rocks Hospital in Virginia, dying there in July 1864. The History of the 1st Maine Cavalry (the Maine men serving in the DC Cavalry would be transferred over to this regiment), pg 572, says he died on 27 July. Affidavit's in his pension file differ on his death date, having taken place between the 27th and 30th , as his cenotaph says. His widow Addie filed for his pension on 6 Sept 1864. They had no children.

A page for his burial place is on Find A Grave in the City Point Cemetery (where the Point of Rocks interments were moved): C B Smith