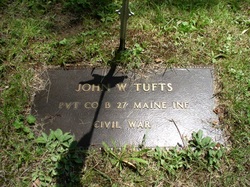 JOHN WILSON TUFTS was born about Dec 1837-38 [based on ages in census; 1900 census] in Dover, New Hampshire [muster roll; Togus recs], the son of David K and Charlotte (Smith) Tufts. He died on 25 Aug 1920 at the National Soldiers Home in Togus, Maine from chronic nephritis, aged 82. His body was shipped home to North Berwick [Togus Recs], where he was buried next to his wife in Mt Pleasant Cemetery.

John lived in Dover and Farmington, NH while young, moving with his family to North Berwick prior to the 1860 census. He lived here some 50 years, working at the woolen mill, until being admitted to the Soldiers Home on 1 Aug 1908. His brother Wilson Tufts served alongside him in the 27th Maine.

John and Mary had the following children:

II. EVALINE TUFTS, perhaps a child of John and Mary, seen with them in 1870 census, age 8. Not known what became of her after this date.

III. FRANK A TUFTS, perhaps a son of this couple, seen in 1870 census at age 2 (may read 7). At this time, his whereabouts are not known after this date.